Somewhere during early 2006 T 27 or the Gilai Sagar female gave birth to a litter of two male cubs, which were given the Identification code of T 28 and T 29. Their father was T 2 or X male (so called because very little was known about him), who at that time was the most dominant tiger of the entire national park. The area where these two brothers spent their early years (Gilai Sagar, Thumka and surrounding parts of the north east end of the national park) is out of bound for visitors and has few motor able tracks. As a result not much is known about their early years.

He was first seen in the tourism zone during early winters of 2008. He was first seen around Berda and soon extended his range till Lakkarda and then on to the three lakes, Jhalara and Nalghati. He is now one of the few dominant males of the national park and his present territory includes Nalghati, Jhalara, almost the entire Mandoop plateau, Lakkarda and the three lakes (Padam Talao, Raj Bagh and Malik Talao). 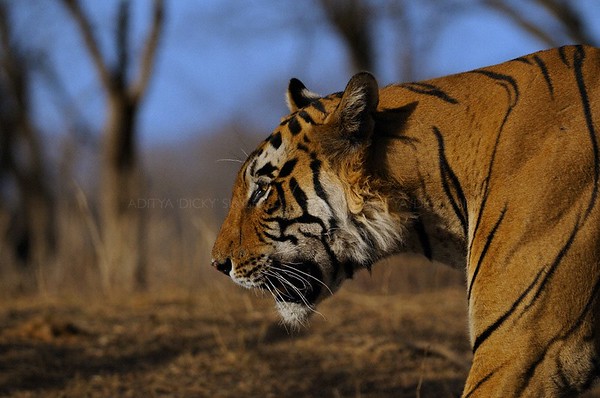 His brother T 29 has established himself in the Berda – Lakkarda – Bandarwal ki Baori area of the park about the same time that Star male took over the area of the lakes. However about a year ago, T 29 was seen in Berda area with a bad led injury. The Forest Department managed to tranquilize and treat him but that probably did not help, as the injury was pretty severe. He has not been seen on the park since then. See picture below. 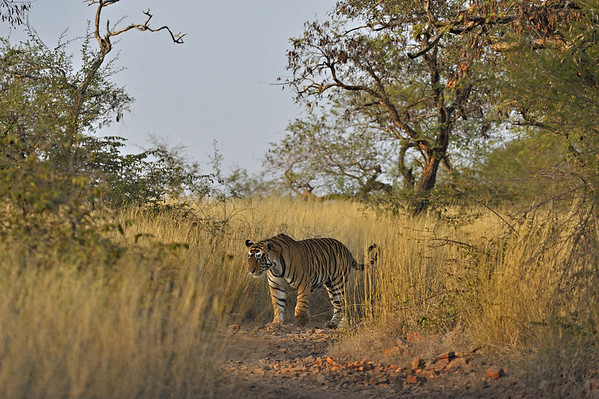 One of the most awesome sightings that I had of the Star male was on the 1st of April 2009, when Star male and Machali had a fight in Lakkarda – see the slide show of the event below. During the end of March 2009, Machali (or T16) killed a large male Sambar deer in a narrow valley (Bhoot Khurra) in the heart of Ranthambhore national park. Two days later Star male snatched her kill and a few hours after that the to of them had a fight. We were fortunate to be in the right place when the fight happened. The Star male was young and at his peak but Machali held her ground. What I liked most about this fight was the way Machali got out of it, when she realized that she could not beat Star male. She did this by going in a submissive mode and the more dominant Star male ended the confrontation.

<< Go back to the previous page

"I could happily sit around the fire eating your food and drinking for the rest of my life. Can I make a reservation?"